“I called her immediately and was like, ‘We can’t do that,'” Morgan said on the series’ aftershow, “Talking Dead.” “I was pretty adamant about it.”

At the episode’s, Negan, who has been working to clear his good name in recent years on “TWD” after brutally killing Maggie’s (Lauren Cohan) husband Glenn on season seven, is given an opportunity to save Maggie.

After acting coldly towards him all episode, with good reason, Maggie calls out to him as she struggles to climb a subway car ladder and the dead try to latch onto her. Instead of lending a hand, Negan looks down and decides to abandon Maggie in a moment of need.

The episode ends with Maggie slipping and falling from the subway car as a group of the undead approach.

To some fans, it may look like Negan is suddenly returning to his old ways or that all of the growth he’s shown since season nine was for nothing. Morgan shared that concern and called up a few of his cast members before speaking with Kang.

“I had talked to Lauren and I had talked to Norm [Reedus] and then I called Angela and I was like, ‘This is a horrible idea. Any good that we have done is immediately gone,” Morgan said.

Why Negan doesn’t save Maggie

Morgan said he came around to the idea after watching the episode in full. He was glad they didn’t change it.

“It makes a lot of sense now, in retrospect,” Morgan said.

When asked why Negan didn’t immediately try to save Maggie, Morgan said, “He is convinced at that point that she’s going to kill him… He’s convinced that he is a dead man and that they’re all kind of in on it. He’s sure of it.”

Later in the episode, when Morgan is asked by a fan if Maggie would have left Negan for dead if the roles were reversed, he said, “She would have pushed him. There wouldn’t have been any hanging on. She wants him dead.”

Kang weighed in to say that Maggie probably would have made the same choice as Negan did.

Earlier on the episode, after getting bullied and pushed around all episode, Negan calls Maggie out, saying that her anger and rage toward him are blinding her ability to safely lead the group through dark, potentially dangerous subway tunnels.

He suggests Maggie just kill him right there and then and get it over with, saying, “I am not going to let you drag me through the mud, filth, and slime to put me down like a dog,” Negan said.

Morgan was just as shocked as viewers to learn that Negan dared to say Glenn’s name to Maggie.

Season 11 was the first time Negan ever spoke Glenn’s name to her and was an especially shocking moment on the episode to hear.

Kang gave a lengthy response to Entertainment Weekly’s Dalton Ross on the decision behind having Negan say Glenn’s name.

“For me, a Negan that is completely soft is not interesting. And I think it’s also not really true,” Kang said. “If he got all the edges sanded off, I would never think he’s being genuine.”

“What’s true about Negan is he likes to talk a lot about his own philosophy. He definitely has his own views of how the world should work, and there’s sometimes been an evolution in those views, but he’s got a big mouth. Sometimes he can’t help himself,” Kang added, saying that it was important for them to retain the core integrity of Negan’s character, which is his edge, and that sometimes leads him to say some shocking things.

Maggie and Negan’s fraught relationship will continue to play a pivotal role this season. 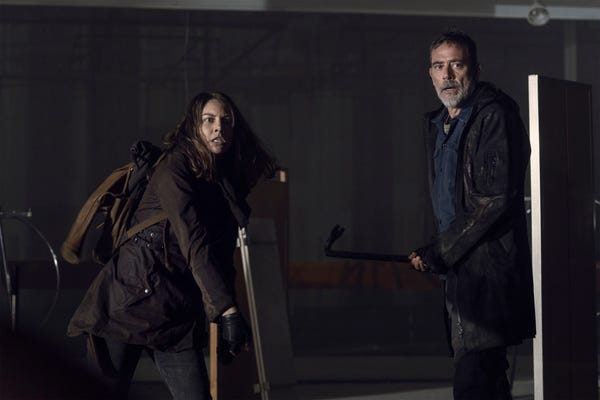 An image for the season’s third episode released by AMC suggests Maggie will be fine as she’s surprisingly standing next to Negan.


Earlier this year, Kang previously told Insider much more of Maggie and Negan was to come on “TWD.”

“It’s one of the relationships that just is so fraught and therefore it’s dramatically interesting to us,” Kang said in February.

Paola Lázaro, who plays Princess, had the best read of the current Maggie/Negan situation, saying on “Talking Dead” that she thought Maggie was “going off the rails” a bit on the premiere. Though Maggie may have needed a scare to wake up, Negan shouldn’t have left Maggie hanging.

The actress had a great suggestion for the two moving forward this season.

“They need to sit down and talk about it,” Lázaro said. “I don’t know if there’s redemption for Negan, but she needed the scare.”

That’s probably not where we’ll see them head any time soon, but it’s not a bad idea. Princess can lead the therapy session.

You can follow along with our “TWD” coverage all season long here.