Travis Barker and Kourtney Kardashian cannot keep their hands off each other.

The couple have not been shy about their romance since they started dating earlier this year and it appears things are becoming even more serious for the pair as they recently traveled together overseas for luxurious trips to Venice and Paris. Just last month, it was revealed that Barker traveled on his first plane since surviving a deadly 2008 crash, thanks to the help of Kardashian.

Both have been posting loved-up photos from their getaway, but a new post on Barker’s Instagram on Friday left fans believing he plans to marry the reality star.

“Forever isn’t long enough,” Barker captioned a series of photos of the pair locked in a steamy make out session in front of the illuminated Eiffel Tower at night.

One photo shows Kardashian, 42, straddling Barker as he holds her up. Another shows the pair holding hands and letting out a laugh. 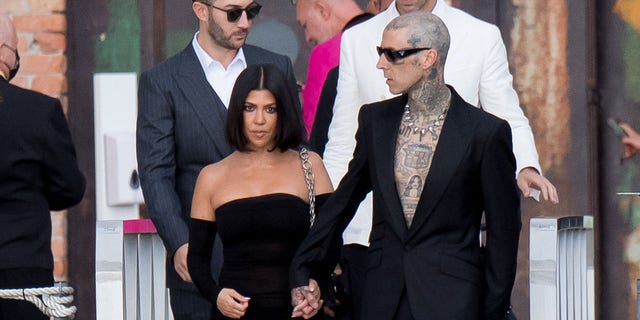 The romantic photos follow quite a dramatic week for Kardashian, whose exes made headlines over social media.

On Monday, Kardashian’s ex-boyfriend, model Younes Bendjima, 28, posted an alleged direct message he claimed was from Disick to his Instagram Stories in which the entrepreneur appeared to shade her public affection with Barker.

The message was sent alongside a photo of Kardashian – who is the mother of Disick’s three children – straddling Barker on a boat. “Yo is this chick ok!???? Broooo like what is this. In the middle of Italy,” Disick allegedly wrote to Bendjima, who then turned around and shared the DM for the world to see.

Bendjima allegedly wrote back, “Doesn’t matter to me as long as she’s happy,” adding, “PS: i aint your bro.”

Barker appeared to react to the news by posting a meme to his Instagram Story of Ray Liotta’s character from “Goodfellas” laughing hysterically.