The Real Housewives of Beverly Hills Recap: Jayne’s Got a Gun – Vulture 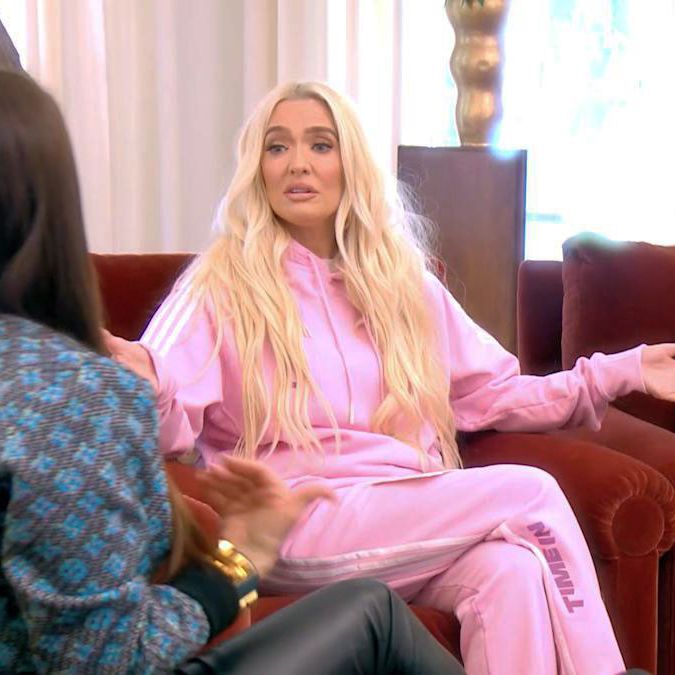 This week on our favorite show, Rich Women Doing Things, boy did the rich women do things. So many things. They have a 25th-anniversary dinner with their hot-stoned husbands, who take credit for decking out the pool house with candles, flowers, and balloons and did not at all mention the PAs involved or even Glenn, the Party Planner, who has been strangely absent all season. They planned a meal for a dinner party with their chef, Jean-Claude, who is approximately 1.25 jillion years old and has been in the culinary arts so long he is actually the credited inventor of the spatula. At the dinner party, they torture the butler, Patrick, with his very own silver bell, and they torture the second butler, Carlos, with their drink orders, and they torture the hostess’s husband, Rick, thinking he is the third butler and then he is like, “I don’t even work here,” and they all giggle and tuck into their caviar pie and wait for someone to come eat them because they are the rich.

The worst part of the dinner party, though, is Dorit. HAHA. JK. There were a lot of worst parts, but Dorit, as she is prone to do, drives me absolutely insane. “I’m going to admit it. I feel like I’m in my element,” Dorit says. “Silver platter. White gloves. It’s all so fabulous.” This is my problem with Dorit. She thinks this is the life she should be living, the life she deserves. She thinks she should be Kathy Hilton rich, but she’s not. She’s just play-acting it in a cheap simulacrum with her Gucci glasses and her Hermès plates while she and her husband refuse to pay their taxes.

Oh, and what about Dorit’s bridal line, Beverly Bride by Dorit? Her first dress is a Jessica Rabbit silhouette with pearls inlaid all over it like it’s some sort of virus culture in a petri dish. Her husband, PK, a feces taco with rat-brain salsa, says he has a brilliant name for it: the Pearl. Oh. Yeah. Brilliant. A dress covered in pearls is called “the Pearl.” Why not just name all of the dresses “the White,” as if it were the first nine seasons of this show? The next dress is a tight sheath with a bouncy train stapled to the back as though a Fire Island drag queen tucked the curtains into her knickers for a lewk, hunty!!!! It is named “the Moment,” like it’s a cast member on Jersey Shore. Next is a tight, lacy number with a mermaid flare at the bottom. The lace looks like something you’d see on a chandelier at a third-tier Thai restaurant on Ninth Avenue. (Yum Yum 3, maybe?) It is dubbed “the Actress” because what everyone wants on their wedding day is to be outshone by some unnamed celebrity.

The final dress is worst of all. It’s flat, white fabric and long-sleeved and up to the neck but with one shoulder peeping out, like the dress is, I don’t know, somehow failing. Or maybe it’s a symbiotic life form taking over Dorit’s body, and slowly she’s just going to become a walking fabric pod. This is, of course, the Woman, but I would call it Audrey III: This Time It’s Personal. The only good part of this scene is that PK, a mouthwash with notes of motor oil, smegma, and bin juice, says they should renew their vows, and please, please do because we know the Housewives truism that a year after a vow renewal the couple is headed to divorce, and I would like to never have to see this man on my television screen again.

Ugh, I guess at some point I have to stop clowning on Dorit and talk about the rest of the episode, in which she wears another Versace dress and hair pom-poms with braids coming out of them, like Chun-Li somehow got her hands on Ryu’s black AmEx. Okay. That’s it. That’s my last Dorit clown. (I mean, not forever. Just for now.)

So let’s preface all this with “Of Course, the Victims” because we shouldn’t forget the people Tom stole money from. (We can shorten this to OCTV like we do with SMIFFEE.) Garcelle mentions it in this episode, and I think it’s important for all of us to keep in mind, but we’re talking about this here reality-television program, and the victims aren’t here so we need to talk about the women. However, I think it’s crazy that we can’t have sympathy for both the victims and the women on this show, including Erika. Sympathy should be like Nutella; there’s always enough of it to spread around, it’s readily available, and it makes us all feel better.

In this situation, I have sympathy for both Erika and Sutton with some healthy caveats. What I really didn’t like was the pre-dinner at Crystal’s house before the big dinner at Kathy’s. Crystal, Erika, Kathy, and Garcelle share dumplings and talk about Sutton, and Kathy starts it off by saying, “I have good news, and I have bad news. No one cares what you have to say.” They then go around the table talking about how they never heard of her before, even though they’re at the same country club, and if she behaved in any other group like she did with Erika, she would be “back in Augusta.”

This really is not the look. Yes, there are plenty of people none of us have heard of, but, as Garcelle pointed out, I had never heard of Crystal until she was on the show, so that is kind of an unintended self-own on Crystal’s part. The Housewives is built on elitism and women thinking they’re better than one another (hello Kelly K. Bensimon’s “I’m up here, you’re down there”), but for some reason, this didn’t jibe with me. It’s one thing to disagree with what Sutton has to say; it’s another thing to try to silence her because she’s, what, not popular enough? She’s on the show now! Her opinion matters whether you like it or not.

I also sympathize with Sutton when she tries to chit-chat with Erika at Kathy’s dinner but Erika shuts it down by saying she has “real problems” and one of them is not Sutton’s opinion of her. Ideologically, I agree with Erika: What other people say about you behind your back is none of your business [dot dot dot] unless your business is the reality-television arts and sciences. Erika’s job is to have a conversation with Sutton about how she feels. That’s like Elon Musk saying he doesn’t want to manipulate the cryptocurrency markets with his tweets.

But I also sympathize with Erika because it’s not as though having that conversation with Sutton would have produced results. Here she is saying to Kyle that she “doesn’t buy” Erika’s story and that she thinks Erika lied. Then she tells Erika to her face that she doesn’t think Erika’s legal troubles will affect her and that she has softened on all of her positions at their initial meeting. Sutton is totally welcome to her opinion that Erika may be misleading them but is totally guilty of what Kyle accuses her of, which is telling the women one thing and Erika another thing. Yes, other women have flip-flopped about Erika, but Sutton called the meeting. She’s at the vanguard of this.

But then I have to sympathize with Sutton because no one should be told to “shut the fuck up” for stating their opinion or just doing their job. With the tears streaking her face like rivulets along the Grand Canyon, Erika gives a vicious performance that I think Sutton’s behavior does not warrant. I also think that if Erika would just hear her out and maybe address some of her concerns, Sutton could find some middle ground with Erika and there wouldn’t be this whole fight every time they get together.

But then I have to sympathize with Erika because she’s right. Every time she shows up “to one of these events” — by which she means showing up to the job she needs more than ever — all they do is talk about this one horrible thing she wants to avoid talking about, the thing she thinks about every single second of every single day. It’s hard to feel sympathy for Erika when there are real victims out there, but I don’t think levels of suffering are comparable. All suffering sucks. I learned that from a Brené Brown quote on my mom’s Pinterest. Erika is clearly suffering. Yes, she spent the money stolen from those victims, but I think that is some of what’s adding to her pain. She finally knows that the lifestyle she was afforded for so many years came on the backs of the “widows and orphans,” as Dorit calls them.

Dame Brian Moylan breaks down all the gossip and drama, on- and off-screen, for dedicated students of the Reality Television Arts and Sciences.


By submitting your email, you agree to our Terms and Privacy Notice and to receive email correspondence from us.