Venice: Affecting and exquisitely acted, Hagai Levi’s update of Ingmar Bergman’s seismic 1973 miniseries finds its own path, albeit one in parallel to many well-traveled routes.

In 2021, television introduced a new chapter of an old story: a five-part limited series that follows a married couple who, after seeing their long-time friends descend into hateful bickering during a double date, start experiencing setbacks within their once-healthy partnership. Tracking the pair through their ensuing fights, separation, and possible reunion, the intimate saga reveals how personal and professional growth, as well as societal pressures tied to monogamy, can impact two people in love.

That was “Master of None” Season 3, which debuted in May of this year and was subtitled “Moments in Love” — a clear, semi-successful homage to Ingmar Bergman’s 1973 classic, “Scenes From a Marriage.” Now, HBO and writer/director Hagai Levi have produced a full-on remake, starring Oscar Isaac and Jessica Chastain as the struggling couple at the story’s center. While Aziz Ansari’s latest Netflix season does little, if anything, to impact how a new “Scenes From a Marriage” lands in 2021, it’s but one of many series and films from the past five decades that were inspired by Bergman’s breakthrough and then built off of its honest, raw ethos. The sheer number of marriage stories (and broken marriage stories) told from a so-true-it-hurts perspective is what dulls this new version, which finds ways to distinguish itself from the original without the necessary insight to leave a lasting mark.

Anyone familiar with the original work will spot parallels right away. Jessica Chastain plays Mira, a tech executive living just outside of Boston with her husband, Jonathan (Oscar Isaac), and their young daughter, Ava. A philosophy professor with flexible work hours, Jonathan serves as the couple’s primary caretaker, while Mira’s demanding profession has her working nights, traveling, and otherwise being pulled away from the home. Early on, as Jonathan and Mira sit for an interview with Danielle (Sunita Mani), an academic studying how modern gender roles affect “successful” monogamous couples, it’s clear that there’s more going on with the partners than a) Jonathan is aware of, and b) Mira is ready to share. 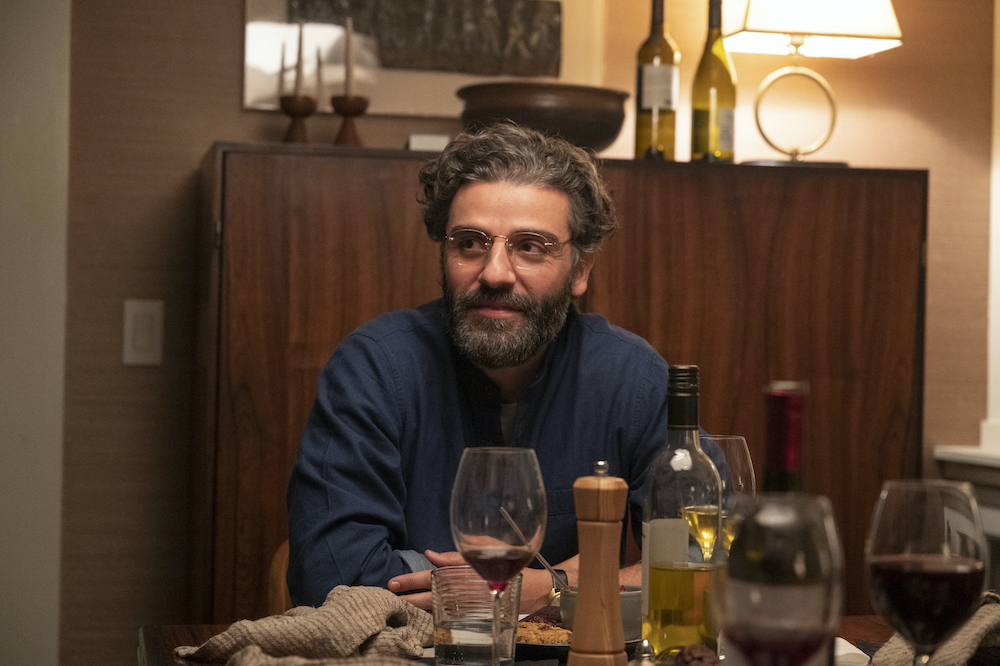 Oscar Isaac in “Scenes From a Marriage”

Much like Bergman’s original, the opening interview lays out their 12-year romantic history quickly while hinting at issues that could crop up in the present. As the two pass the storytelling back and forth, details emerge, like Mira’s past abusive relationships, her serial monogamy, and guilt over being away from their daughter so often. Jonathan talks about how he’s distanced himself from his family’s faith in Orthodox Judaism, how his asthma has come to define him, and why people who talk about “working on their marriage” are buying into the corporatization of coupling. “These apps and TV shows, it’s a huge business,” he says. “Western culture, consumer culture, has very purposefully created these irrational expectations that marriage, at all times, must be based on passion, on sex, on relentless emotional intensity.”

Levi wrote, directed, and created the Israeli series “BeTipul,” which inspired HBO’s “In Treatment,” so he knows his way around a couple’s conversation with a questioner. The camera often settles on Mira over Jonathan, even as Jonathan talks over Mira, watching her become preoccupied in her thoughts or tear up slightly while recalling a specific memory. These small yet meaningful observations pop as their problems intensify, creating a verisimilitude essential to investing in a story as private as this.

Still, one of the two overt twists Levi makes to Bergman’s story is a curious invitation for the viewer to put themselves in each character’s shoes. (The other is a gender swap which makes itself obvious by Episode 2, if not sooner.) To start the initial episodes (and at the end of the finale), the camera tracks either Isaac or Chastain as they make their way onto set, sometimes sticking with them all the way until Levi calls action. Masked assistants stand on soundstages as Chastain strides into the house that’s not a house, but a set; a snow machine feigns a winter storm as Isaac is ushered past crew members staring at their cell phones. For a minute each hour, you see the series for what it is: a collection of staged scenes.

Bergman first introduced his couple via an on-camera interview, before moving past their pristine public image to see what turmoil exists behind-the-scenes. Levi inverts that choice, starting backstage, then rolling the cameras, and letting the audience see it all. While similar fourth-wall breaks and meta acknowledgements can work to distance the audience from a scripted story, Levi’s choice draws you closer — like he’s daring you to forget you’re watching a TV show, after reminding you of that very fact. It works, and soon you’re engulfed in a relationship you didn’t think was real, much like Bergman forced you to witness a reality many preferred to ignore. 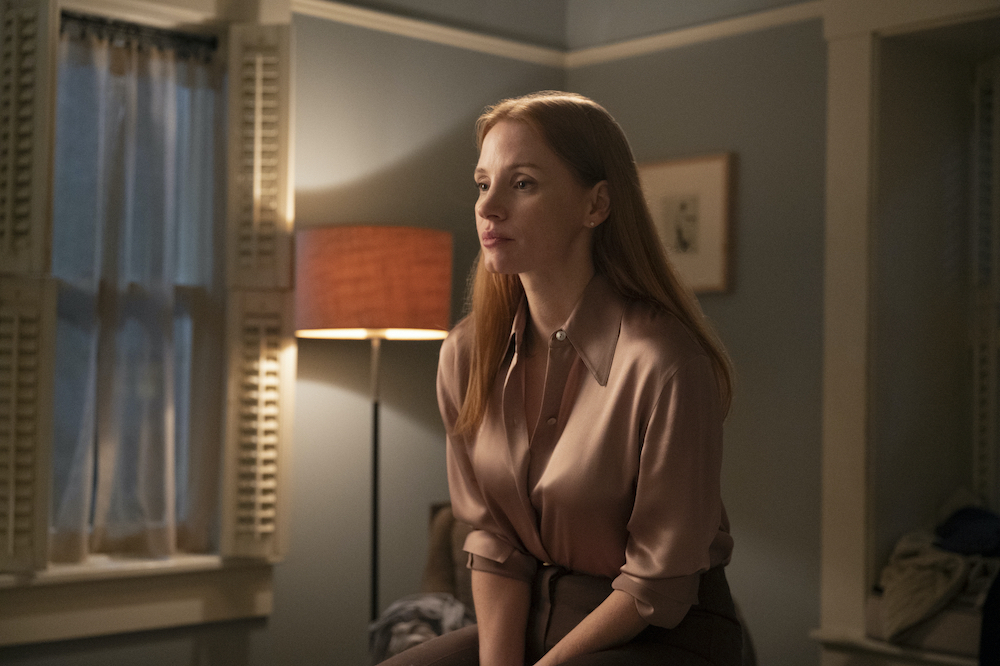 Jessica Chastain in “Scenes From a Marriage”

Of course, the two leads help ensure that level of investment. Not only does the handsome couple first introduced in “A Most Violent Year” still carry a casual chemistry that can be dialed up or off in an instant, but they both fight for their characters in such a way that makes them identifiable and convincing individuals. Mira is enigmatic, holding back parts of herself until they come bursting out, but Chastain doesn’t keep the audience as shut out as her husband; she imparts distinct emotions in gestures big and small, which helps establish a meaningful bond with Mira, even when you might not like her. If Mira is tortured, Jonathan is complacent, and Isaac nails the comfortable vibe of a man who sees his past as his past and his present as a separate, hard-earned reward; he’s all too reluctant to open any old doors, fearing that what he’s overcome will overwhelm him again.

Seeing Jonathan’s happiness turned inside out is agonizing. It’s not just that hours of fighting, bargaining, and begging can be exhausting to witness; it’s also difficult to see anything positive coming out of their fractured union. By the end, Mira pays dearly for added self-awareness, but Jonathan is an obliterated shell of his former self — for the uninitiated, those aren’t spoilers. “Scenes From a Marriage” isn’t so much a will-they-won’t-they romance as it is a study of partnerships. Problems that are patched up can still leave wounds, just like irreconcilable disputes can force a break-up that’s better for both parties. But Levi’s drama is missing the kind of overarching emotional acuity than can lift one love story above all the rest.

The middle episodes in particular call to mind impossibly anguished marital tales like “Blue Valentine,” “Revolutionary Road,” and “Who’s Afraid of Virginia Woolf?”, which predated Bergman’s picture by nearly a decade. But both Edward Albee and Bergman were working to shatter an illusion cemented over time — that holding all marriages to the impossible standard of perfection could, instead, make them snap under the pressure. Such expectations certainly linger in 2021, but Levi’s limited series looks at these scenes from the opposite end. In his director’s statement, he says, “I felt it was time to also speak about the price of divorce,” in contrast to Bergman, who weighed “the price of a marriage.”

Relationships like Jonathan and Mira’s are worth fighting for, and refusing to do so before it’s too late can prove costly. That much is painfully clear in the series, but it’s arguably been clear without it. Jonathan’s overconfidence and skepticism toward “working on your marriage” may contribute to his relationship’s implosion, as does Mira’s silence and doubts, but emphasizing the value of a partnership by watching it collapse is more tragic than insightful. (And the series’ assessment of monogamy — as something not only difficult to sustain, but damaging to try — feels contradictory to the idea that everyone coming out the other side of this series will value their partners all the more.)

HBO’s “Scenes From a Marriage” is curious to watch in contrast to Bergman’s original, just as it’s tender craft and measured performances make it easy to admire. But for anyone who’s toughed out any of the difficult character studies that already succeeded the 1973 classic, this latest iteration may not be worth the heartache.

“Scenes From a Marriage” premiered Saturday, September 4 at the Venice Film Festival. The limited series will debut Sunday, September 12 at 9 p.m. ET on HBO.

Sign Up: Stay on top of the latest breaking film and TV news! Sign up for our Email Newsletters here.