Police had sought details concerning the group’s funding and membership in relation to an accusation it was working as a “foreign agent,” in violation of the city’s sweeping national security law, according to a letter seen by CNN late last month.

The letter said the group, the Hong Kong Alliance in Support of Patriotic Democratic Movements of China, had 14 days to submit the information, or face up to six months’ imprisonment.

Under the law, which was imposed by Beijing last year, authorities have wide-ranging powers to crack down on political crimes.

Chow posted on social media early Wednesday morning that police were ringing her doorbell and attempting to open the door.

CNN has reached out to the Hong Kong police for comment. 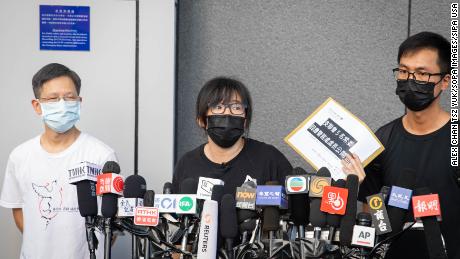 The Alliance, formed more than three decades ago to support those protesting for democracy in Beijing, said on Sunday that it would not comply with the police request, which included orders to hand over its members’ personal details, as well as all meeting records with political groups in Hong Kong, Taiwan and overseas.

The city’s security agency released a statement later Sunday with a “solemn warning” that “endangering national security is a very serious crime,” and that the Alliance “should immediately turn back before it is too late.”

But the group doubled down on Tuesday, submitting a letter to police arguing they had insufficient grounds to request materials. In their letter, the group added that it was not a “foreign agent,” and that police had yet to explain why they believed the group was linked to foreign forces.

Tsui Hon-kwong, a member of the alliance, said on Tuesday that a judicial review had been filed to challenge the police request.

In response, Carrie Lam, the city’s leader, criticized the group for disobeying police. “I must strongly condemn (the Alliance’s) statements,” Lam said on Tuesday. Security Chief Chris Tang also warned on Tuesday that those who do not comply with national security police orders would face consequences.

Hours later, in the early hours of Wednesday morning, the arrests were carried out.

The Hong Kong Alliance has held an annual candlelight vigil on the anniversary of the Tiananmen pro-democracy crackdown since 1990.

The events of Tiananmen Square began with protesters in Beijing, mostly college students, gathering in the heart of the Chinese capital to mourn the death of an ousted former leader — then, to push for governmental reform and greater democracy. In the early hours of June 4, 1989, the Chinese military entered the square, with orders to put down the protests.

No official death toll has ever been released, but rights groups estimate hundreds, if not thousands were killed. The protests and crackdown have been wiped from the history books in China, censored and controlled. The annual candlelight vigil in Hong Kong has been, for decades, the only mass memorial held on Chinese soil.

But the vigil’s days appear to be numbered. Several core members of the Alliance, including former lawmakers Lee Cheuk-yan and Albert Ho, are serving prison sentences over charges of unauthorized assembly.

This year’s event was banned by authorities, citing coronavirus restrictions. Hong Kong’s Security Bureau also warned that attending or promoting any June 4 rally could violate the national security law and result in imprisonment. 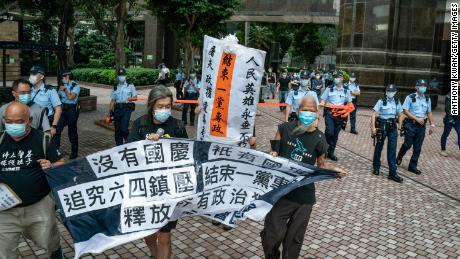 Under the security law, protesters, journalists and pro-democracy figures have been arrested; newsrooms have been raided and forced to shut down; and textbooks, films and websites face new censorship.

A number of other activist organizations and civic groups — many of which, like the Hong Kong Alliance, have been a key part of the city’s political and social fabric for decades — have folded after facing pressure from police.

Authorities in Hong Kong have repeatedly denied they are using the law to crackdown on political opposition or stifle dissent.

“I am confident that the police is using this power properly, based on the evidence that they have, to ask for the information,” said Lam last Tuesday when asked about the Alliance. “We respect civic society.”

However, she warned, the law will be “fully implemented” to “stamp out any activities that will endanger national security.”