Celebrities were quick to take to social media to celebrate the life and career of late television icon Ed Asner.

The actor’s death was announced through his official Twitter account Sunday, which noted that he died peacefully. No cause of death was given.

“We are sorry to say that our beloved patriarch passed away this morning peacefully. Words cannot express the sadness we feel. With a kiss on your head- Goodnight dad. We love you,” the tweet reads.

He was perhaps best known for playing Lou Grant on “The Mary Tyler Moore Show” and its subsequent dramatic spinoff, “Lou Grant.” The role made Asner a household name throughout the country. However, as Deadline notes, Asner was the former president of the Screen Actors Guild as well as the most decorated male performer in Emmy history, with seven wins under his belt. This also made him one of the most important figures in Hollywood for a time. 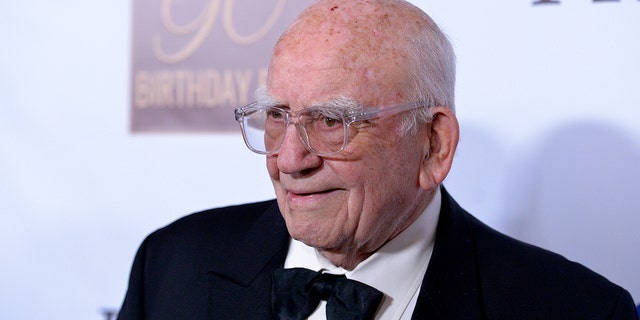 Ed Asner’s friends and supporters in Hollywood paid tribute to the late star following news of his death.
(Getty Images)

As a result, his death sent a ripple effect throughout the show business community, prompting many of his Hollywood friends and collaborators to take to Twitter to pay tribute to his life and career.

Josh Gad was among the first, sharing an image of the animated character Asner voiced in the Oscar-winning Pixar movie “Up” and honored his other voice role on “Central Park.”

“I am heartbroken to say goodbye to our friend #EdAsner who graced #CentralParkTV as the voice of Bitsy’s brother Ambrose,” Gad wrote. “He was a Legend, a beautiful soul and a truly brilliant actor. Love you sir! We will miss down here, but smiling that you are have fittingly gone Up.”

“Oh Ed Asner Rest In Peace and power friend. what a truly good and honorable human you were .gratitude for all you did for the screen Actors Guild ,when it was a true Union bless you,” Rosanna Arquette added.

“Ed Asner, who won seven Emmy awards including five for the unforgettable role of Lou Grant, has passed away. He was a giant on the screen, and a philanthropist, too. A man of true heart and talent. He will be missed,” wrote “Star Trek” actor George Takei.

“Sending love to The great Ed Asner’s family. An icon because he was such a beautiful, funny and totally honest actor. No one like him,” wrote comedian and actor Ben Stiller.

“My friend Ed Asner was everything I’ve always wanted to be. Actor, author, activist, warm, lovable, gruff, lefty, patriot and a great father. Every member of SAG owes Ed Asner so much. Please keep supporting ⁦@EdAsnerCenter,” wrote Tom Arnold along with a photo of the two of them together.

Actor Clancy Brown shared support for Asner’s charity in his social media eulogy, writing: “Darn it. He was the best of us. TRULY a great man. Please support the Ed Asner Family Center and Ed’s legacy of good works.”

“Thanks, Ed Asner, for a lifetime of great work,” wrote Harry Shearer.

“Ed Asner was a talented actor and a very nice man. He always had a twinkle in his eye. Rest In Peace, Ed,” wrote filmmaker John Carpenter.

“Ed Asner was a fine man and a great actor. He was tough in the ways that count and suffered no fools. I acted with him just once and knew how lucky I was to do so. A hero. Rest in peace, Ed,” added Michael McKean.

“I had the honor to witness Ed’s generosity and compassion first hand. He was one of a kind and will be sorely missed. RIP Ed Asner. @EdAsnerCenter,” wrote comedian Wanda Sykes.

“Ed Asner meant so much to so many for so many reasons. What a life. Colleague of my Dad, shepherded my Mom into the Union Presidency, whooped my a– at poker, fought against war & lies, fought a lifetime for our Union & stood up to it just the same. Sending love to his family,” wrote “Goonies” star Sean Astin.

“We just lost a great one. Ed Asner. Seven time Emmy winner—Lou Grant to the star of ‘UP,’ Ed always wanted to be part of things that mattered. Cant believe he was just a guest on my podcast August 16. Deepest condolences to his family that he loved so much,” wrote comedian Bob Saget along with an image of him and Asner.

“The great Ed Asner. @TheOnlyEdAsner What an inspiration he was to me as a young actor. Not to mention the years of laughs he brought into my household when I was kid. Thank you Ed. My heart goes out to his family and friends,” wrote Vincent D’Onofrio.

“Had the privilege of locking eyes with #EdAsner on Studio 60 and it meant a lot to me because I grew up loving him and he was one of those rare actors who just shot straight. He couldn’t help it. Rest In Peace, sir. Well done,” wrote Bradley Whitford.

“Ed Asner’s characters brought so much joy to so many for so long. Time determines icons and the decades solidified his place. RIP and thank you,” wrote KISS member Paul Stanley.

“Heard the great #EdAsner has passed away. One of the greats in show bizz history. Worked all the way till the end. In fact he did a reading with my bro Daniel just weeks ago. Thanks for all you taught us acting, activism & autism. Please make a donation to the @EdAsnerCenter,” wrote Billy Baldwin.